ACG Boston, the Boston Chapter of the Association for Corporate Growth (ACG), honored five members with inaugural chapter awards at a celebration recently held at the Boston Harbor Hotel. 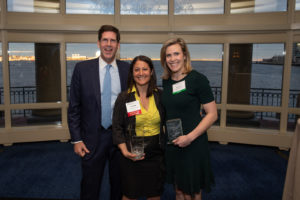 Among the night’s honorees was Watermill President and COO, Julia Karol, who received the ‘Woman of Influence’ Award. According to the association, the award is given to “the female member of the ACG community who has risen to a leadership position of excellence in the M&A industry, and is actively involved in empowering, supporting and connecting women within ACG, and the larger M&A ecosystem.”

“Through her own career path and experiences, her participation as a speaker, sponsor and mentor, and an active member of the Women’s Connection committee for the Chapter, Ms. Karol has played a significant role in supporting ACG Boston in our mission to elevate, empower and connect women in the M&A community,” stated Christy Dancause, Executive Director, ACG Boston. “She is seen as a role model by peers and colleagues in the industry. We couldn’t be more thrilled to present her with this award.”

“It’s been a privilege to be a member of the Boston ACG Chapter, which is leading the charge to build an inclusive and engaging environment for all middle-market M&A professionals,” stated Ms. Karol. “This inaugural award is especially humbling to receive, and I’m looking forward to working with others to create a future where our industry attracts a diverse and vibrant mix of leaders.”

As an active ACG member, Ms. Karol participates in regional and national events as both a panelist and attendee. In 2018, she participated in the ACG Global strategic planning retreat in Nashville where she and other members helped to shape the direction of the organization.

Watermill joins ACG Boston in congratulating the recipients of the 2019 Chapter awards, who alongside Ms. Karol include:

In addition to the award recipients, the event held on April 24th recognized ACG Boston’s 40th year in the M&A industry – a milestone which Watermill recently celebrated as well.

This article was originally published by BusinessWire.